skip to main | skip to sidebar
(note: the time stamp of all posts and comments on this blog is the time in umm el-fahem, israel)

(for larger images click on each image. to return to blog hit back arrow at top of page)

nareg hartounian (of ft. lee, nj), the founder and director of NAI, was unexpectedly in yerevan for my opening. he had flown in for the weekend to pay his respects to the parents of two children in shushi who had been killed in a building collapse. shushi is in nagorno-karabakh, a disputed area not recognized by most governments as the independent state it declared itself to be [e.g., american peace corps members are not allowed to travel to n-k]. i had mentioned earlier that i was planning to travel to shushi with the other acsl resident artists to meet with artists, staff and members of naregatsi's shushi center. unfortunately roger got sick, the trip was postponed indefinitely as we all faced looming deadlines. having gotten our visas we were then not able to make the trip.] 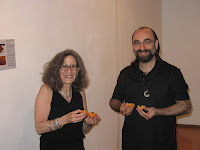 while we were setting up for the 6pm opening reception nareg added an overflowing platter of seasonal apricots and yellow cherries to the armenian areni wine and rice crackers that i had set out. after instructing me that the proper way to eat a ripe apricot is to split it in half at the nut we had an official susan's first bite of an armenian apricot moment. it was amazingly sweet and tasty.

NOTE: many years there are more apricots in armenia than people can consume or process and they sell for 50 drams (currently +/- 370 drams to the dollar) a kilo (2.2 lbs.). however because of problems this year with the crop, the price now is about 800-1000 a kilo. 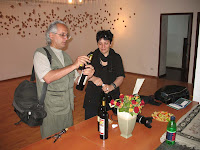 image above: raj (teaches photography in yerevan schools) and susanna uncork in preparation for the opening. 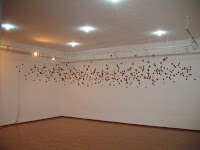 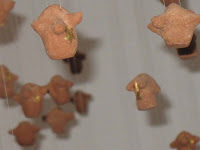 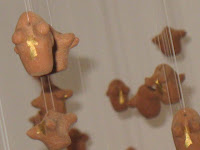 the reception was well attended and the work was well received on different levels: by some visually, by others what they imagined it was about, and by others what they understood about the work from my remarks & having read the bi-lingual armenian/english brochure text. the opening and my time in the gallery were also opportunities for me to meet local artists who had come to see the work. 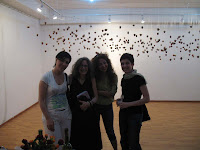 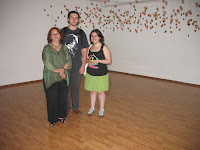 image above: sculptor heriqnaz galstyan with albert and daughter arpe.

nareg is very plugged into the city, the country, and the people and is very comfortable speaking off-the -cuff. he assumed the role of m.c. and invited me to speak about the work and tom mittnacht, public affairs officer u.s. embassy in armenia, to talk about the embassy's relationship with the eghegis jewish cemetery.

[NOTE: i had put in cold call to mittnacht to ask if the embassy would fund the nothers exhibit brochure. while there was some formality in the process basically mittnacht was positive about supporting the work of an american artist who had been motivated to work in armenia. i did not know that the embassy had funded the 2009 publication JEWS IN ARMENIA: THE MIDDLE AGES, a compilation of papers delivered at a may 2009 symposium sponsored by the NGO, the "jewish community of armenia". it had not been clear to mittnacht that my art work was based on material from the eghegis jewish cemetery excavation site reports (authored by prof. michael stone of the hebrew univ. of jerusalem & archaeologist david amit, jerusalem). 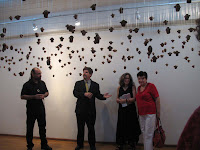 image above: (l. to r.) nareg hartoumian, tom mittnacht, scd, rimma varzhapetyan (feller) president of the "jewish community of armenia" presented scd with a copy of the armenian-, russian, and english-language publication. 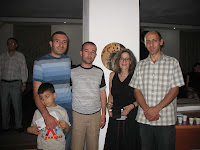 dessel with movses avetisyan, master ceramicist in charge of the mkhitar sebastaci educational complex ceramics workshop in bangladesh, his son hayko, and associates garik margaryan and lucciano zaqaryan who most generously gifted the mirror to the aritst for the show's second piece "There can be no difference if there is no sameness", Armenian Merchants in the 17th and Early 18th Centuries, v. baldounian & m. makepease, eds., 1998. 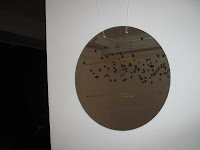 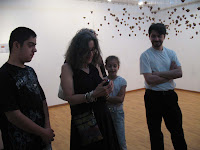 i was asked by the naregatsi art inst. (NAI) staff to to spend a few hours at the gallery each day as it seems some journalists simply pop by thinking that i will be there. while here, there have been gallery visitors as well as media which has given me an opportunity (through verbal and body language communication) for feedback.

there is a definite disconnect over one point, even when i am in dialogue with viewers speaking about the installation. i make it very clear that this work is not about religion. that i used the 6 pointed star of david (armenians seem not to recognize it as a "jewish" star) and the kachkar (cross) to imply the difference between the double-sided forms. however even journalists had a difficult time with the concept of "nothers" and attribute the idea behind the work to god. collecting clips that discuss the work incorrectly has been quite frustrating.

e.g., while this article is thoughtful the lead is absolutely incorrect, the point having been clearly made to the reporter that god is not a part of this conversation: youth on line

there was the journalist (male) who asked me if my intention had been with this work "to bring feminist ideas to ". there was no point in trying to explain that i approach everything in life from a feminist perspective, it is simply a part of who i am and of my work.

many take satisfaction from thinking that the work is about motherhood as women's destiny (although university students ask me do you have children while others -- some not much older and generally male -- ask me how many children do you have). artists and others involved in the world of art understand conceptual work while the general public seems to be perplexed and uninterested. when i am at the gallery and able to engage people in conversation (often with the help of a translator) they listen intently and ask questions and are open to what i describe as the responsibility (my belief of course) of those with histories of being labeled "outsiders" to be open and inclusive of OTHERS. but the education system, the wall text in the national history museum (yea! yesterday i got to two museums. finally!) clearly reinforces nationalistic behaviors.

as an artist i can only hope that viewers start a dialogue with themselves and/or others about what they have seen and so at least i feel that with some i have succeeded in this. 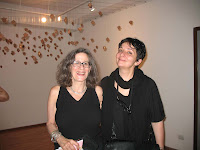 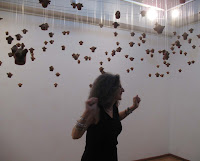 susanna took this shot unbeknownst to me, but i feel that it communicates the very good feelings that i had about the ability of the work to communicate with a new audience.