skip to main | skip to sidebar
(note: the time stamp of all posts and comments on this blog is the time in umm el-fahem, israel)

note: i intended to post this last night, however due to technical difficulties i finally gave up trying to upload the images and shut down the computer. it is now tuesday evening and i will try with renewed energy.


thank you very much! to those who have posted comments. actually they do not seem to get posted but instead are sent to me through e-mail (and the terrible e-mail situation is why i decided to re-start the blog). mysterious.

my fingers cannot possibly work as quickly as thoughts to share with you are pouring out of my head. five days have passed since i last posted. i will continue to not write in the order of when things occurred, for i think that it does not really matter. certainly with each day i get to know, and appreciate, the people connected with the gallery (in whatever way) a little better as they too become better acquainted with me, and as they and i move together into the future trust will grow and that will make a difference. but it is my hope that simply the anecdotal information and snapshots will combine to create a rich, visual image of my time here and of the personalities and lives of some of umm el-fahem's residents.

on october 18th i wrote about the tragedy of the triple murder that had occurred the previous evening, monday the 17th. while the particulars of this story are terrible and involve so many of the people of this small city (e.g. Said's wife Siham, principal of a local elementary school, had to bring in psychologists this week to meet with the children in her school, for children of some of the extended families of both of the  families involved attend her school), it is the larger issue that has mobilized the people of umm el-fahem, neighboring arab villages, and other arab-israeli towns in israel.

the issue was brought up last thursday, oct. 20th, by visitors to the gallery: my friend, artist rosemary solan from jerusalem, and two of her friends who live on kibbutz meggido (among the many kibbutzim on their way to total privatization: complicated, fascinating, and raises the what makes a privatized kibbutz a kibbutz question) not far from umm el-fahem.

All had been to the gallery some previous time which speaks to the israel they would like to live in. They talked about the fact that arab on arab crime is not pursued by the police, and that it is thought by many (jewish and arab israelis) that it is not in the interest of the israeli police to spend time, resources, or energy to solve crimes that take place in arab-israeli towns (siting known instances of this seemingly accepted "policy").

It was with this conversation in mind that i determined when i heard friday morning about a demonstration planned for friday mid-day that, if it seemed not to be a stupid thing to do, that i wanted to participate.  joanna felt similarly.

we had been invited to said and siham's home for friday breakfast. 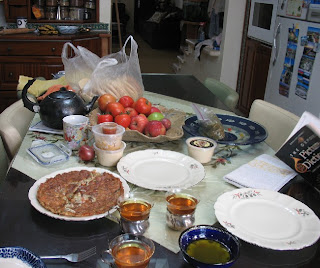 it is a family tradition that said prepares breakfast on friday, although the household was like any other with teenagers in that they slept late, then ran out, missing the feast that said and siham set before us,  grabbing something from the table halva -- halawa, haleweh, ħelwa, halvah, halava, helava, helva, halwa, halua, chalva, chałwa -- anyone? 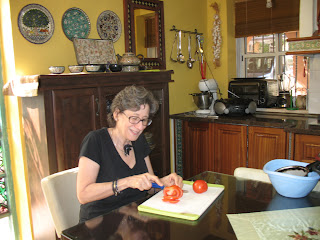 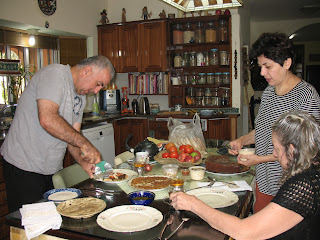 [an aside: one of siham's brother-in-law's family owns the local halva factory. given my limited time remaining here in u e-f i may not have a chance to go on a tour of the factory but will look forward to joanna's description. and this is as it should be as joanna loves halva while i love my childhood memories, & most of all the memory of benny (my father) enjoying it, more than i do actually eating it. for those who did not grow up with this delicacy, fresh, not packaged joyva, although that too, especially covered in chocolate, has known to be a tasty treat, it is basically sesame paste (tahini) and  sugar.


on the way to the abu shakra home we had asked said about the planned demonstration. it had been called by the mayor & city council for 12:30pm friday, after prayer ends. the point was to send the message that arab blood, arab lives are not not less valuable than jewish blood, jewish lives, that the citizens of umm el-fahem do not condone murder or violence and that they want the murderer apprehended and brought to justice. also when we asked him, said responded that it was perfectly safe for us to go and n fact the people of u e-f would  feel very good that those not from u e-f support their efforts.

ruwan (his  and siham's 17 1/2 year old daughter who we have gotten to know as she works in the afternoons at the gallery) was going and was happy to have us go with her and her good friend afnan.

we later learned that this was the very first time that ruwan (recently admitted to the hebrew university in jerusalem for the program of special needs in the dept of education) had participated in a demonstration, unlike afnan (now a student at the american university in jenin) who had gone to demonstrations as a child with her parents.


and so we ate, and ate, and ate some more (no dessert although siham had baked. simply no way to manage it after the fabulous omlette and multiple pita dishes (made in a special electric pan) with various toppings: wild zatar, onions and cheese, tomatoes, onions and tuna, and freshly made olive oil which tasted spicy, great hummus, etc.  ruwan and afnan were anxious to go and finally got us away from the table.

they took the care of us as their charges very seriously. afnan did not let go of me and ruwan held on to joanne. 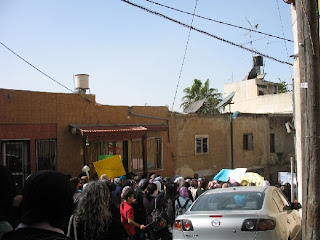 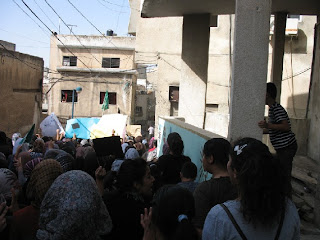 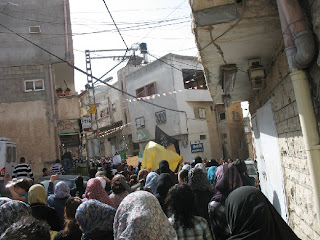 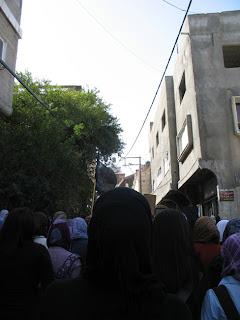 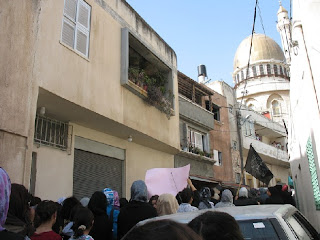 we were with the women and children. the streets wind around and up and down and we had no idea where we were. at points we were basically running, with afnan and me getting further and further ahead. it turned out that at some point the heat and the difficulty of walking/running in inappropriate foot ware caused joanna to turn back and find her way to the gallery.

afnan heard her phone despite the roar of the women and we stepped out to wait fo ruwan and then again began looking for holes in thecrowd to squeeze through and move further and further toward the beginning of the throng of women, and then at last into the futbol (soccer) field for the speeches.

it was not always comfortable for me. i could not understand the slogans being chanted or the handwritten signs. i asked for translations throughout the demonstration,  yet still. 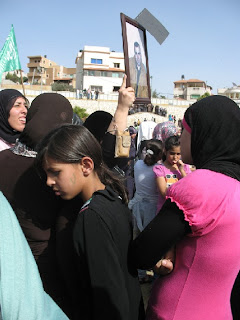 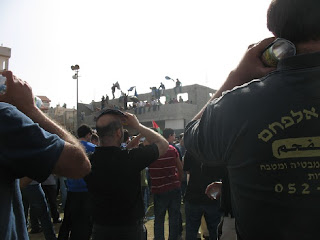 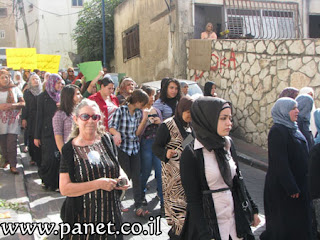 joanna in the sunglasses, in the headscarf front right is ruwan 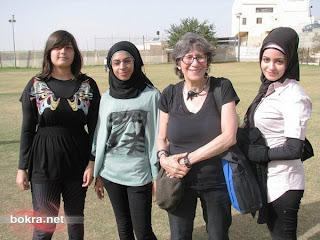 In the photo with me are, l to r, fatima, afnan and ruwan.
we are smiling as if posing because we were posing. the journalist asked us as everyone was leaving the field if he could take our picture.

the police have been advised by the mayor that if the murderer is not identified by sunday then demonstrators will set up camp outside of the office.

the police station is located at the entrance to u e-f. as i have previously mentioned, i have not seen even one policeperson inside of u e-f, other than yesterday when the police officer who heads the police dept.'s community service program for the area was invited to j's completion celebration (a feast j brought in for all of us for lunch,  served on the roof of the gallery to mark the last day of his three months of community service). don't know if the policeman's invited presence at the table counts as police in u e-f.

what i know is hearsay, i.e. i don't know the actual numbers but most seem to agree that the u e-f police force is made up of scores of  jewish-israelis  and at the most 4 arab-israelis.

the tension between the police and the local citizenry runs high. as we walked with teh demonstrators joanna and i felt people's anger at the situation and sadness at the murders and disappointment with the system, but we felt no tension nor were uncomfortable in the crowd.

it is difficult to believe that the police will begin to do their jobs as unbiased law enforcers. but perhaps the recent demonstration -- the largest ever in umm el-fahem or the area and the first time women have participated as a group will result in resident representatives of u e-f and the police sitting down at the table to talk about their concerns and what the police might do to correct them (but probably not).

o.k. so as to post this i will end with some photos of local foodstuffs, and the last image of an interesting positioning of stores in one of the new local buildings, a mini mall. 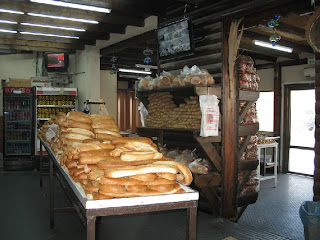 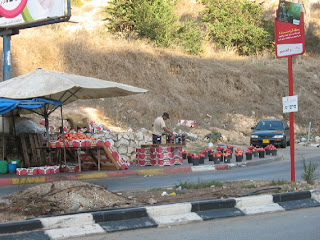 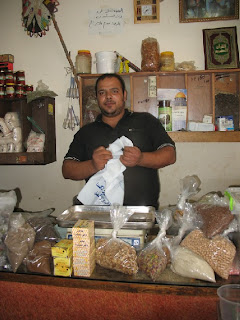 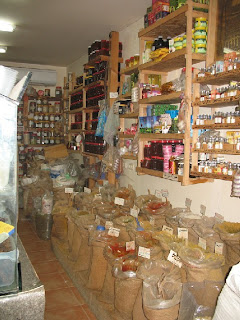 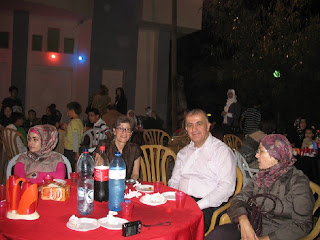 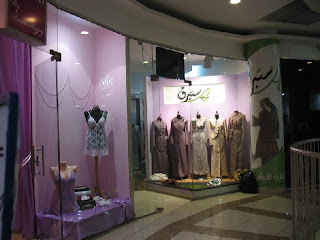